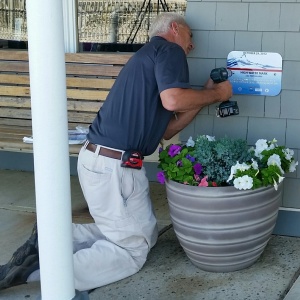 Nearly four years after the devastating flood waters of Superstorm Sandy swept over coastal towns across the county, the Monmouth County Board of Chosen Freeholders and Sheriff Shaun Golden today commemorated the high water mark with a sign at the county’s Belford Ferry Terminal.

As many as 100 High Water Mark (HWM) signs will be installed in prominent locations within participating municipalities. The signs aim to focus attention on the effects of flood waters in our area. The goal of the program is to ensure the public remains diligent about taking long-term actions to protect themselves, their property and their communities, and brings an added bonus of lowering flood insurance premiums for homeowners.

Municipal participation is voluntary and is being offered at no cost to every municipality in the County, regardless of their Community Rating System (CRS) status. Participating municipalities will earn additional CRS program points for greater flood risk awareness, and consequently lower the cost of flood insurance for residents.

“Fourteen Monmouth County towns have joined the High Water Mark Initiative. These towns have made a commitment to improving their resiliency to future storms and in the process reduced flood insurance premiums for their residents,” said Freeholder Deputy Director Serena DiMaso, liaison to the county’s Office of Emergency Management.

The HWM signs are part of a countywide collaboration with the Federal Emergency Management Agency (FEMA), National Flood Insurance Program (NFIP), and its High Water Mark Initiative. The HWM Initiative is a community-based awareness program that sets its sights on increasing local communities’ awareness of flood risk and encourages action to mitigate the risk.

“Keeping the public aware of the risks associated with storms is a priority of the Monmouth County Sheriff’s Office, Office of Emergency Management,” said Sheriff Shaun Golden. “These signs will be strategically placed in participating towns and provide residents, visitors and businesses with a constant reminder of the flood risks that can occur with living near the coast. It further reminds them that they need to take the appropriate actions to prepare their families and mitigate their properties in advance of the impact from storms which produce flooding.”

As part of the initiative, communities install the signs in designated locations to enhance ongoing educational efforts to build local awareness of flood risk. In addition, towns must take comprehensive measures aimed at strengthening community resilience against future flooding, such as stormwater management projects, and building elevation.

The HWM Initiative is being implemented across the county through the County’s Division of Planning, Office of Emergency Management, Monmouth County Board of Chosen Freeholders and Monmouth County Sheriff’s Office, in collaboration with Monmouth University’s Urban Cost Institute which is coordinating efforts and providing additional assistance to communities wishing to participate in the program.

“The signs will be a constant reminder that major flooding can occur in our coastal communities and should move residents and businesses to action, obtain flood insurance and prepare,” said Freeholder Director Thomas A. Arnone. “Whether it is making a plan, making a kit, or putting valuable information in waterproof containers, there are low-cost and no-cost ways to protect ourselves, our loved ones and our property from floods.”

The County is in the process of developing signs and identifying locations to be used in each community at their discretion.

HWM attendees were invited to tour the “Molly Pitcher,” a U.S. Coast Guard-licensed passenger ferry operated by NY Waterway. The “Molly Pitcher” has space for 400 passengers, with seating for 350 passengers in fully climate-controlled cabins. The ferry is part of the fleet of ferries that carries Monmouth and Ocean County commuters to Jersey City and New York City daily.

Any town interested in finding out more about this program is encouraged to contact the Monmouth County Office of Emergency Management at 732-431-6400, ext.1802.